KMV Enters into the Third Day of Faculty Development Program

Erudite Scholars and Experts Enlighten the Teachers on Diverse Topics 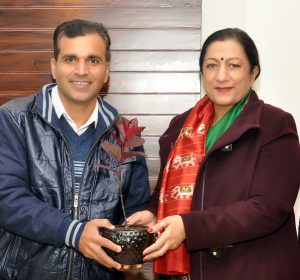 The inaugural session of the third day was addressed by  Dr. Harsh K. Verma, Professor, Department of Computer Science, Dr B.R. Ambedkar National Institute of technology, Jalandhar. He delivered a talk on IOT: Internet of Things.

In the very commencement of his lecture, he ignited the minds of all participants by defining what is IOT & how IOT has been evolved from past many years. He showed a video of Chatty Gargoyle at Denver International Airport showing the beautiful example of Artificial Intelligence. He also emphasized that this world is of sensors and according to him by 2020 seven devices will be connected for an individual. He also stressed that the coming era will be the era of energy saving smart devices. In the conclusion, he stated that the interconnection of smart devices with anyone, anytime, anywhere connected to anything. The second session of the day was addressed by Dr Sanjeev Kumar, Assistant Professor, School of Mathematics, Thapar Institute of Engineering & Technology, Patiala. The topic of his talk was      Work Life Balance. During his talk, he enlisted the causes of imbalance between work and life. He also gave the solution about all the causes. He concluded his lecture by saying that the imbalance can be removed by being natural as possible and removing mobile phone for at least 7-8 hours. The last session of the day was conducted by Dr Gopi Sharma, Department of Physics, KMV. The topic of her talk was Research Proposal. During her talk, she guided the teachers about how to write a research proposal so that your objective is fulfilled. She also emphasized on the ground work one has to do before presenting a proposal. She concluded by saying that the project must be practical & proposal should be proposed by keeping in mind the national & international scenario. Principal Prof. (Dr.) Atima Sharma Dwivedi averred that the Faculty Development Program will prove to be  a lifetime experience for the teachers as teachers are being exposed to the new arenas of teaching learning methods in this FDP. She also emphasized on the fact that KMV provides a great opportunity for all the teachers to develop themselves. She also apprised that the fourth day of the FDP will also witness the presence of many more acclaimed academicians and scholars.