Kanya Maha Vidyalaya- the Heritage & Autonomous institution, Ranked No.1 College  in India by India Today Ranking’s Unit of N.S.S. observed Vigilance Awareness Week based on the theme “Integrity-A way of life”. Under this awareness week, activities were divided into two parts, the first category activities were held inside the college and in the second category, the activities were held outside the college campus under social outreach and community development programme. The students participated for a week long celebrations with full enthusiasm & zeal. An Essay Writing competition was also conducted within the college in which more than 100 students participated, a poster making competition based on the theme of vigilance awareness was also organized, a mobile quiz competition was organized related to laws regarding vigilance & PPT, debate and declamation contest was organized on the same theme. 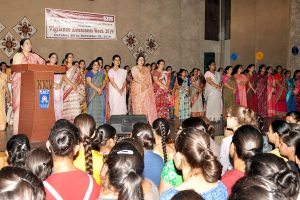 The weeklong celebration ended with an oath taking ceremony. Various activities were also performed outside the college campus such as a meeting was held with the members of Gram Sabha of karari village, adopted by the college under the project of Unnat Bharat Abhiyaan  and a special lecture was also organized  on the theme of vigilance at Baba Kashmira Singh Govt. Senior Secondary School, adopted under the project of Unnat Bharat Abhiyaan. Principal Prof. (Dr.) Atima Sharma Dwivedi averred that KMV has always been taking various initiatives in social outreach programmes as college aims to contribute for the betterment of the society in various ways. She also distributed the certificates and trophies to winners and also congratulated the winners. She also lauded the efforts of NSS Unit of the college and the department of Political Science for this initiative.