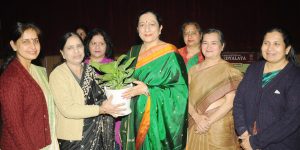 Kanya Maha Vidyalaya- the Heritage & Autonomous institution, Seat of Women Empowerment, Ranked No.1 College  in India by India Today Ranking (Various Categories) organized a week long celebrations to commemorate the National Science Day on the theme “Women in Science”. The celebration was organized by the Faculty of Sciences of KMV. Principal (Prof.) Dr. Atima Sharma Dwivedi extended floral welcome to the guests. In her opening remarks, Madam Principal averred that science has important role in our lives to play as all the phenomena of our lives are directly or indirectly impacted by the science only. She also encouraged the students to aspire high to become  the great Women Scientist & also laid emphasis on the fact that the women have given a great contribution to the field of science. She apprised all that KMV has been given the coveted status of Star College by DST, Government of India to provide the quality based education in the field of science. Dr. Suman. B. Beri, Professor Emeritus, Department of Physics, Panjab University, Chandigarh delivered a talk on ‘God Particle’. She made students aware of Higgs Boson experiment. She said that the interesting things disappear almost instantly and we see whatever the result is. So we have to act like detectives for finding the evidence to see what has happened. According to her, students should be passionate for understanding different phenomena of science. Dr. Vandana Bhalla, Associate Professor, Guru Nanak Dev University, Amritsar gave talk on ‘Celebrity Science’. She started her talk by mentioning that everybody is a celebrity, giving example of Tiger Mahii. She defined science as body of knowledge and process. She discussed about Eureka moment in science by citing example of Archimedes and Dr. Alexander Fleming. She further added that being scientist is not about studying science but asking right questions and looking for suitable answers. She discussed about rich contribution of India in science since ancient times. She also mentioned about the importance of communication in science. Poster making, slogan writing & PowerPoint Presentation competitions were also organized during the whole week to celebrate this event. Ms. Anureet a student of M.Sc. Physics gave a presentation on leading prominent women scientists of India, detailing their role in the area of Research and Development