Kanya Maha Vidyalaya – the Autonomous & Heritage institution, Seat of Women Empowerment, Ranked No. 1 in India by India Today Ranking 2019 (various categories) organized Annual Athletics Meet “Trailblazer-2K20”. Every year the spirit of sports is celebrated with enthused response from both the players, non players along with the faculty members. 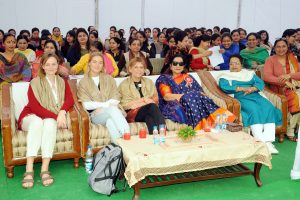 The day commenced with a floral welcome of the Chief Guest for the day Principal Prof. (Dr.) Atima Sharma Dwivedi who is the Patron and a source of inspiration for the whole college. She formally declared the Annual Athletics Meet open before unfurling the sports flag and releasing the tri coloured balloons in the air. This was followed by an impressive March past by the players of all sports team. The teams included many state, national and international players and also the winners. The torch of the Sports was also lit on the occasion and players also took an oath of true spirit of Sportsmanship without indulging in doping. Principal Prof.(Dr.) Atima Sharma Dwivedi while addressing the audience averred that sports is a prestigious human activity since the dawn of human civilization and we cannot imagine the world without the sports. She also encouraged one and all to participate whole heartedly in the events of the day. During the colourful progression of the day various events in the categories for players & non-players took place namely 100mt & 200mt race, Obstacle race, Long jump, Sack race, Needle & Thread race, Back race, Spoon & Potato race, Shot put, Coin race, 400 & 800mt race for non-players. The other events for the faculty included 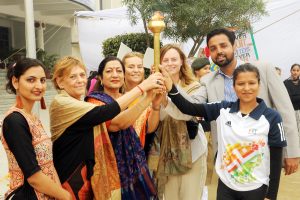